Message
OK
Return
Login
Sign Up
Username *
Your login must contain between 3 and 20 characters.
Only Latin letters, numbers, hyphens and underscores can be used.
Login already in use
First Name *
Last Name *
Email *
There is a mistake in your email
E-mail already in use
Password *
Your password must contain from 6 to 23 characters
Your login and password are too similar
Confirm *
The passwords do not match
Country *
Postal Code
Birthdate *
Promocode
* Required fields.
SIGN UP
Change nickname
Welcome to BetVoyager!
Welcome aboard mate! Here at BetVoyager we strive to offer the best features anywhere in online gaming.
Try our special No Zero Roulette, the only roulette in the world with real equal odds during gameplay.
To receive 5 Free Spins on our More Gold Diggin 3D slot game, you must enter your cell phone number.
DEPOSIT
PLAY NOW
BetVoyager Deposit
Please choose a gateway for payment:
Sum in RUB:
Minimum deposit sum is € and maximum deposit sum is €
We would like to remind you that you may need to for certain promotions.
For your information, when transferring funds using a credit/debit card, you may be required to present documents which confirm that you are the owner of the card.
DEPOSIT
PROCESSING ...
?
LOGIN
loading...
0
SIGN UP
DEPOSIT
Games Fair Play Promotions Lottery
€ loading...
DEPOSIT
Language:
Games
Popular
Equal Odds
Mobile
Roulette
Slots
3D Slots
Poker
Video Poker
Blackjack
Other Games
Download Casino
Fair Play
Download Casino
Promotions
Payment Rules
General Rules of the Games

The game is conducted on a standard roulette table with a single zero. Bets are placed using chips. Bets can not be mutually exclusive. All the roulette bets can be divided into two classes: field bets and track bets. 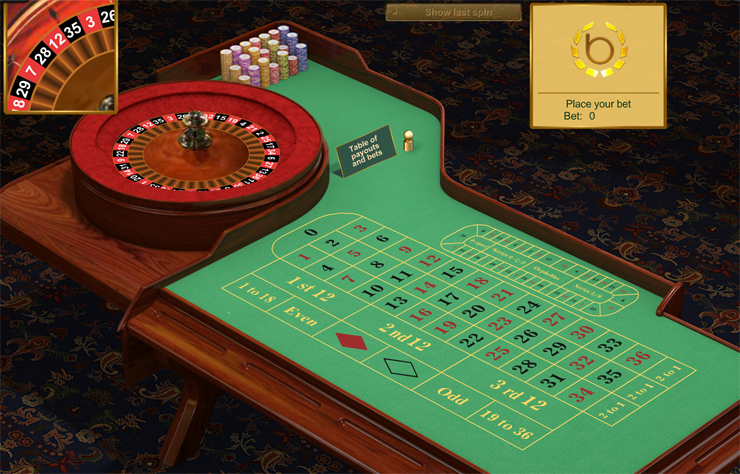 The chip is placed on the center of the chosen number. Betting on the zero is allowed. Payout: 35:1.

The chip is placed on the line between two numbers on the roulette table. It is also possible to bet on the combination of the zero with numbers from the first row: 0-1, 0-2 or 0-3. Payout: 17:1.

The chip is placed on the corner where the four numbers meet. Payout: 8:1.

There are three numbers in a Street. The chip is placed on the right vertical line of the desired row. Payout: 11:1.

The Six-line covers six numbers. The chip is placed on the corner between rows. Payout: 5:1.

There are 12 numbers in each of the three Columns. The chip is placed on the field under the chosen column. Payout: 2:1.

The player may not place simultaneous bets on red and black, odd and even, 1-18 and 19-36, any three dozens, or any other bet that would be mutually exclusive.

In some casinos, these are called announces or call bets. These bets are related with the layout of numbers on the roulette wheel, not the playing field. The roulette wheel is divided into three sectors. French terms are used to denote these sectors: the voisins du zero (or just voisin), orphelins (which consists of two fields) and tiers. Furthermore, within the voisin sector there is another sector called zero spiel (German term). 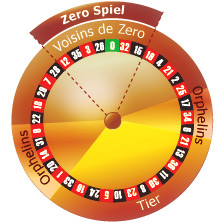 This is a bet on five numbers located next to each other on the roulette wheel: the two neighbors from the left and from the right are added to the chosen number. For example, a bet on “16 and two neighbors” is actually a bet on the following numbers: 5, 24, 16, 33, and 1. Five chips of the same face-value are used in this bet.

The Course of the Game

Here are some basic rules and recommendations that will help players to familiarize themselves with the game.

Features of No Zero Roulette

No Zero Roulette RTP: 100% during gameplay

Features of No Zero Multiball Roulette and No Zero Roulette Express

No Zero Multiball Roulette and No Zero Roulette Express RTP: 100% during gameplay